A video featuring a resilient seven-year-old from Swift Current has already accrued more than ten million views on TikTok since being posted Wednesday evening.

One of those viewers is one of pop music’s biggest superstars – Halsey.

“I was like what!” Bella Thomson’s mom Kyla said Thursday afternoon of the viral post showing her daughter drawing a fox. 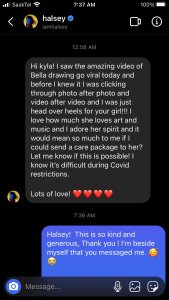 Bella loves getting mail, her mom told Global Regina.”I read her message and it was just a kind message saying she saw the video on TikTok which led her to my Instagram. She [asked] after watching some videos on there and seeing her love for music and art and everything she’s been through, if she could send Bella a care package.”

As of Thursday evening, the video had 11.3 million views, 1.8 million likes and 21.6 thousand comments.

Several other videos on the channel featuring Bella and her mom are also racking up big numbers.

But Kyla says she didn’t have any intentions of going viral on Instagram, TikTok or any other app (in fact her very first TikTok was posted just four days ago).

Instead, she wanted to document her daughter’s medical journey and just how courageous Bella has been.

Bella was born with numerous medical conditions and spent the first two years of her life in the Alberta Children’s Hospital.

She was born with a rare bowel disease called hirschsprung. She is currently listed and awaiting a bowel transplant. She also needed a bone marrow transplant at the age of one to treat severe combined immunodeficiency.

But Kyla says her daughter has never let any of that get her down, a trait that has inspired all who have the chance to see her.

“She can go through surgeries, or multiple days with not being able to eat, and just come out happy as pie,” Thomson said.

“I’ve had friends and other parents with kiddos in hospital say ‘Bella makes my day!'”

After going through it herself, Kyla says she knows first hand how disheartening and isolating it can be to have a child in hospital.

“With the mental struggles I’ve gone through living in hospital, I thought ‘OK, let’s just block out the negative and focus on the positive,'” she said, “just like Bella.”

She says that she hopes the videos she’s already taken, and those she posts in the future can help other parents who may be struggling get through the day.

“When you’re in hospital and you feel like you’re going to go home and then you don’t — that’s really difficult,” she said. “There’s little support for the parents, it’s all for the kids. So I think that’s my main goal — to try and help parents in similar situations.”

She encouraged fellow parents who may be struggling to reach out to mental health professionals.

Kyla said that since her channel blew up, she’s been receiving lots of requests from family and friends to “meet the demand” and post more videos.

In her cheery, uplifting voice, Bella had the last words on the matter…