Japan to dump wastewater from Fukushima nuclear disaster in the ocean

Japan to dump wastewater from Fukushima nuclear disaster in the ocean

Japan has decided to treat and dump vast quantities of wastewater from its ruined Daiichi nuclear power plant into the ocean, in what it claims is the “best” solution for dealing with the contaminated leftovers from the Fukushima disaster.

The radioactive water amounts to over 1.25 million tonnes, or enough to fill 500 Olympic-sized swimming pools. It’s been sitting in 1,000 storage tanks since 2011, when an earthquake and a tsunami in Fukushima shattered the Daichi power plant and triggered a triple meltdown.

Water has been used to keep the cores cool ever since, but it consistently leaks out and mixes with the surrounding groundwater. The tanks are filling up with approximately 170 tonnes of newly tainted water each day, and the pressure is on to start emptying them out.

The Japanese government announced the decision to clean and dump the water on Tuesday, sparking outrage from environmentalists, fisheries and foreign governments that are uneasy with the notion.

Japan says it was forced to make a decision because the tanks are a hazard and will not do as a long-term solution.

“On the premise of strict compliance with regulatory standards that have been established, we select oceanic release,” the government said in a news release. It adds that the water will be diluted and filtered for harmful isotopes before it is released into the ocean.

Read more: A million cannibal ants have been unleashed from a nuclear bunker in Poland

Japan plans to spend several years treating and filtering the water before slowly releasing it into the Pacific Ocean over many decades. The process is expected to start in two years.

Local fisheries say their catch has already shrunk in the area around the plant, and they expect the yields to plunge ever more if the wastewater is dumped.

Many Japanese citizens gathered in Tokyo on Monday and Tuesday to protest the decision. 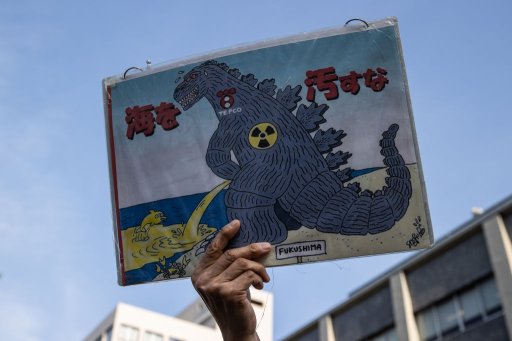 A man holds a placard during a demonstration outside of the Prime Minister’s official residence on April 12, 2021, in Tokyo, Japan.

China condemned the move as “extremely irresponsible,” while South Korea dubbed it “totally unacceptable.” Both nations hinted at taking further action to contest the decision.

“In this unique and challenging situation, Japan has weighed the options and effects, has been transparent about its decision, and appears to have adopted an approach in accordance with globally accepted nuclear safety standards,” it said in a statement.

The International Atomic Energy Agency has also said it will help with the process.

“Today’s decision by the government of Japan is a milestone that will help pave the way for continued progress in the decommissioning of the Fukushima Daiichi nuclear power plant,” it said.

— With files from The Associated Press

Bridgerton is renewed for seasons 3 and 4 at Netflix