Stay off the ice: Warning from Edmonton firefighters as river rescue calls increase

With unseasonably warm temperatures and social restrictions driving more people outdoors, Edmonton firefighters have responded to more calls than normal of people walking on the ice of the North Saskatchewan River.

“I often wonder if it’s perceived that because you’re walking along the shore, it’s safe?” chief of special operations Bruce McWhinnie said.

“But unfortunately, the river follows a path of its own and quite often along the shore is where the water is at its deepest and it certainly has the strongest current.”

Walking on the ice is never safe, fire rescue cautions. The thickness varies due to several factors, including constantly moving water, changing river depths, chemicals in the water and warm spots near drainage outflow pipes.

No matter how thick the ice appears to be, there are weak areas that can give way at any moment. With the mild winter Edmonton has experienced so far, many parts of the river are still exposed. 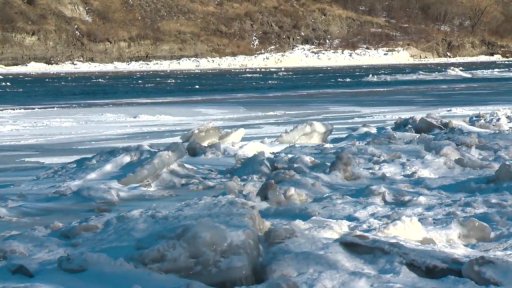 The North Saskatchewan River in Edmonton, Alta. on Thursday, January 14, 2021.

McWhinnie said so far this month, people have left the ice when they hear emergency sirens approaching or have been coached off after firefighters arrive.

But if they fall though, the chances of survival and rescue drop. A person’s body loses heat 25 times faster in water compared to the same temperature in the air, according to EFRS.

In a similar caution last month, McWhinnie said statistics show a person has nine minutes to self-rescue, which he said isn’t a lot of time for emergency responders to arrive.

In water that’s close to freezing, hypothermia can set in within minutes and people’s limbs go numb to the point of uselessness. Even before that, the panic and shock of falling into icy cold water can be disorienting.

“Hypothermia is real. It affects your ability to self-rescue as the body shunts all your blood into the core,” McWhinnie said, adding the bigger danger comes from being trapped under the ice.

“If you do get underneath the ice shelf, you’re not going to be strong enough to swim against the current to get out. And obviously, the ice shelf could go on for hundreds of metres,” he explained.

“With hypothermia, you have some time — once you’re under the ice shelf, I’m not sure you have that same level of time.”

It isn’t just the river that has unpredictable ice thickness — the city says it’s true for all bodies of water, including creeks and neighbourhood storm water facilities that have been built to look like ponds in newer communities.

Read more: Edmontonians warned to keep off stormwater facilities: ‘Stay off the ice’ 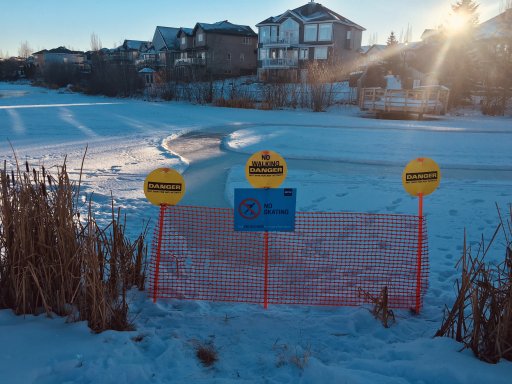 A stormwater facility blocked off in Edmonton’s Glastonbury neighbourhood 2020.

Last month, EPCOR issued a warning about those bodies of water, explaining they’re much different than regular ponds because they help move snow melt and storm runoff from the streets and through the drainage system.

Because of this, contaminants get washed into the drain, which increase the water temperature. This compromises the ice quality by melting it from below. Water is continuously flowing through storm water ponds, which makes any ice that forms on the surface “very unstable and highly dangerous.”

There have been three fatalities in storm water facilities in Alberta in the past three years, including one in Edmonton in 2017.

McWhinnie said if you see someone who has fallen through, don’t try to save them yourself: instead, call 911 and meet first responders when they arrive so you can tell them where the person was last seen. This also applies to pets that fall though the ice.

As far as EFRS and EPCOR are concerned, McWhinnie said most bodies of water are the same.

“They’re all covered with ice. And a lot of the elements come into factor, in regards to successful rescues.”

“So the message is: if it’s covered in ice — with the exception of something like Hawrelak (Park) where that ice is engineered — you need to stay off it.”