On his way to becoming a prospect for the 2021 CFL Draft, Austin Fordham-Miller of the Western Mustangs made a key decision.

And it didn’t come anywhere near the football field.

“I got the wake up call that if you want to play football [at any high level]… you are going to have to do something about your academics,” Fordham-Miller remembers.

A time in life when mature and rational realizations are relatively rare.

“When I entered high school, I didn’t go to the academic level right away and we were talking with an academy at the time and they mentioned that if I wanted to go do university ball, then I would have to up my academic level,” says the six-foot three-inch, 263 pound Morpeth product.

“I really started pushing myself and focusing on my studies and my schoolwork. At that point I knew that if I was going to have any chance in a professional league, that was going to start early.”

That start is now paying off as huge as the physique that Fordham-Miller has been firing around the field for the Western Mustangs.

The native of Morpeth has been invited to the regional CFL Draft combine.

Fordham-Miller is on the radar for a draft that doesn’t have a date quite yet. Various reports have it pegged for sometime in early May. The Canadian Football League, which did not play a single game in 2020 due to the COVID-19 pandemic, is still hoping for a mid-June start for 2021 although hurdles like finances, fan attendance and permission from each of the provinces where the league currently plays still remain.

He will be part of the virtual combine with teammates Griffin Campbell, Nicolas Theriault and Justin Nickson. Myles Manalo of the Mustangs and Oneida Nation’s Sage Doxtater, who attends New Mexico State University, will take part in a national combine.

Both events are usually held in-person but pandemic restrictions have moved them online. 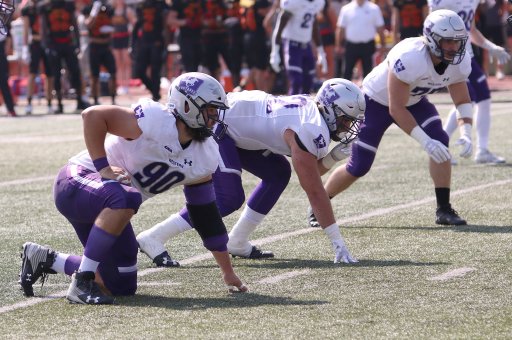 Fordham-Miller admits that football-related activities have been anything but normal dating back to last March.

“As a team we have to take the responsibility to stay away and socially distance from each other, but we have had to get some form of training in… it’s been tough but we have definitely been working through it.”

Strength training hasn’t been as big an issue, but Fordham-Miller points out other workouts have been a little more unorthodox for a football player.

“Hitting the gym a much a possible, going for long runs with the dogs and just trying to get in field work on any grass that you can find.”

Fordham-Miller’s football career began when his stepfather brought home a pamphlet for the Chatham-Kent Cougars in Blenheim where he lined up as quarterback. He played the position for three years but Fordham-Miller knew he would eventually wind up in a different spot on the field.

“There was really no future as a QB. But man, tackling the quarterback, that’s where I was strong.”

And that he continues to be. Fordham-Miller had 30 solo tackles and a sack for the Mustangs in 2019, and is taking absolutely nothing for granted with what could come next both in the game and in the classroom where he is close to completing a university degree.

The guy who was not making education a priority at 15 years of age knows where credit belongs.

“If it wasn’t for football, I don’t think I would be able to dream about anything like [a degree]. Football has opened up so many doorways and so many paths for me.”

Now Fordham-Miller gets to see where those doorways and paths will lead him next.