Vancouver’s mayor is hailing a successful COVID-19 vaccination campaign in the city’s Downtown Eastside as “hopeful news,” as health-care workers prepare to begin giving second doses to people in the community.

“Thanks to the hard work of Vancouver Coastal Health staff and the local community, immunization in the Downtown Eastside has gone so well that the community is approaching herd immunity,” Kennedy Stewart said at his Wednesday media availability.

Since the health authority began its Downtown Eastside vaccination campaign, about 7,500 community members and 2,000 social and support workers in the area have been immunized, VCH medical health officer Dr. Althea Hayden said.

The campaign focused on the region’s most vulnerable, including people who were homeless, under-housed, living in shelters and single-room-occupancy (SRO) hotels and people who were accessing social services in the DTES, a community Hayden estimated to be about 10,000 people.

The undertaking involved massive outreach into the area, including going door-to-door at some shelters and SROs and holding large drop-in and smaller targeted clinics.

Hayden said the DTES was prioritized for vaccination for two key reasons.

Efforts to vaccinate members of the DTES community began in January, though Hayden said the pace was slow initially due to low supply of vaccine.

But as the weeks went on, the community began to see a marked reduction in virus transmission, similar to what has been observed in the province’s residential care facilities.

Data provided by Vancouver Coastal Health showed weekly cases in the community peaking in mid-February at nearly 80, before falling to five by April. 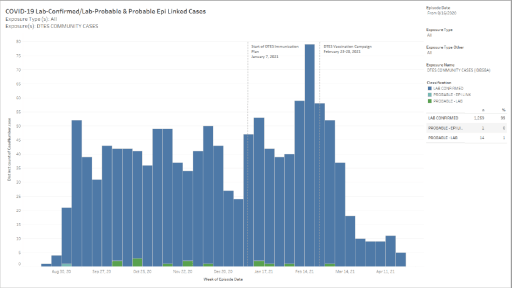 “It’s just been frankly dramatic. I think it’s very similar in a lot of ways to the effect we’ve seen in long-term care,” she said.

“And I think it it tells a really hopeful story about what we’re going to see for our whole community very shortly.”

Because many in the neighbourhood may not have easy access to a phone or email or be plugged into traditional media, Hayden said the process of ensuring people get their second doses will largely replicate the herculean effort of the first round, including direct outreach and easy to access drop-in clinics.

“It’s a tremendous relief — this is why we all do our jobs, right, is because we want to be able to protect the most vulnerable people who are really experiencing some of the worst health outcomes,” she said.