COMMENTARY: What’s next for Donald Trump? Will he face charges after he leaves office?

Among the central pillars of American politics is that presidents accept electoral loss with dignity and generosity. At the same time, those defeated have not been hounded and jailed for their actions while in power.

This differs markedly from democracies like Brazil and South Korea, where defeated presidents have been regularly jailed when their opponents seize power.

By egging his supporters to storm Capitol Hill, Donald Trump unleashed forces that could terminate his presidency before Jan. 20, see him charged with crimes after leaving office, and further tarnish the legacy he has sought so hard to create.

Trump finally committed to a “smooth, orderly and seamless transition of power” in a video message released more than 24 hours after the mayhem at the Capitol left at least five people dead.

But a question on the minds of many is, why did he continue for so long to battle against the November election results?

A different man might have graciously accepted defeat in November when it was obvious Joe Biden had won. Freed from the need to pander to his ideological base, he could have used the last two months to lead the battle against the COVID-19 pandemic, heal wounds, burnish the Republican Party and show generosity to opponents.

The difference between politics and business

It may be that the first president in American history without prior political experience does not fully appreciate the differences between politics and business. In politics, winners and losers don’t crush each other or harm political traditions and institutions.

Long-time politicians of all parties know that they will need each other in the future, and that ultimately they need to co-operate to govern a nation. 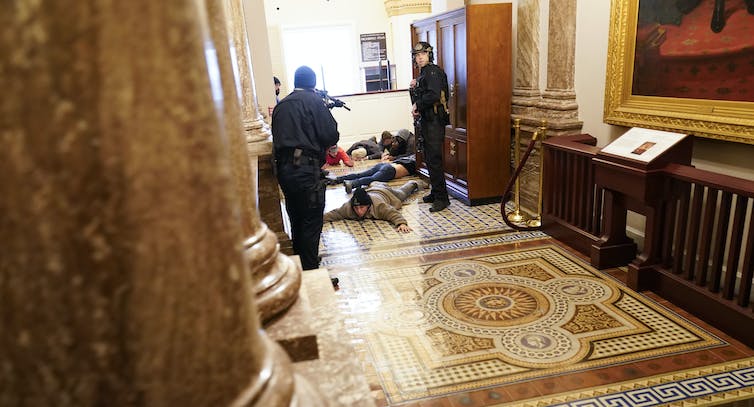 U.S. Capitol Police hold protesters at gunpoint near the House Chamber inside the U.S. Capitol on Jan. 6, 2021, in Washington. (AP Photo/Andrew Harnik)

Having blazed an unprecedented post-election path, Trump now faces the possibility that the 25th Amendment of the U.S. Constitution will be invoked. Democratic leaders and even some Republicans are calling for it.

Taking the steps required by the constitutional amendment — especially the need for Vice-President Mike Pence, a Trump loyalist for more than four years, to invoke it — likely makes it a non-starter. Any formal effort to remove Trump less than two weeks before Biden’s inauguration could also cause even more ideological division in a country already on tenterhooks. 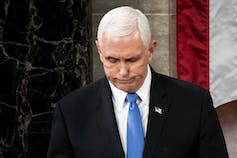 Pence officiates as a joint session of the House and Senate convenes to confirm the Electoral College votes cast in November’s presidential election after the raid on the Capitol by Trump supporters. (Erin Schaff/The New York Times via AP, Pool)

In all of American history, no former president has been charged with criminal behaviour after a term in office. This is due to an unwritten understanding by the political elite that the office of the presidency and American politics could be diminished by such an action. Charging one former president with criminal wrongdoing may raise the likelihood of the next former president being charged as well for partisan reasons, creating a vicious circle.

At the moment, in keeping with American tradition, Trump has not been charged or indicted with any offence. However, once leaving office, there is at least one criminal investigation that will proceed in New York into one of his companies. Other possible investigations also could start.

No president has pardoned himself while in power, and no president has sought a pre-emptive self-pardon for charges that have not yet been laid, as Trump is reportedly contemplating.

The closest situation occurred in 1974 when then-president Gerald Ford pardoned his predecessor, Richard Nixon, on charges of obstruction of justice. 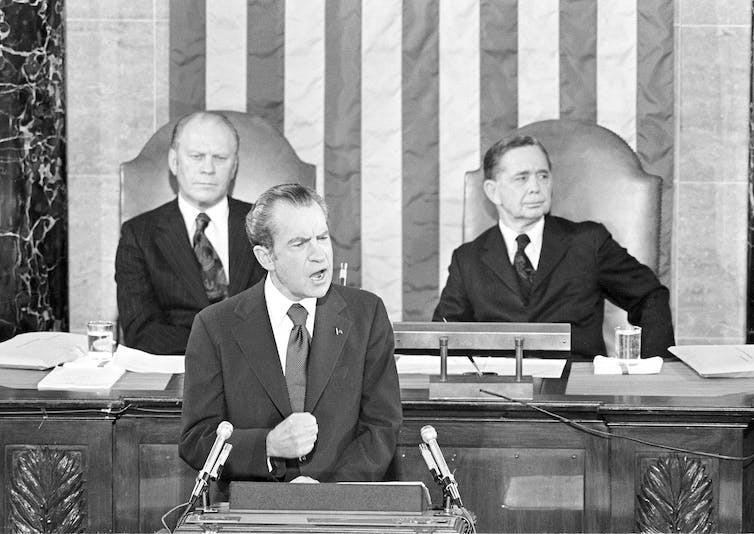 In this January 1974 photo, Ford and House Speaker Carl Albert listen to Nixon deliver his State of the Union address to a joint session of Congress in Washington. (AP Photo)

Any effort by Trump to invoke a self-pardon would run into the problem that he himself noted in mid-2018: “Why would I do that when I have done nothing wrong?” A self-pardon, even if ultimately deemed constitutional, would tarnish the legacy of the president who sought it.

The increasing hyper-polarization of American politics and Trump’s outrageous behaviour may have tipped the scales on the protection granted by the political establishment to former presidents.

Biden and his supporters could conclude that Trump does need to be charged once his term is finished as a reprimand and warning for future office-holders.

Conversely, if Trump investigations result in charges, the Biden administration could then issue a pardon in keeping with the precedent set by the Ford-Nixon arrangement.

This would preserve some of the dignity of the office of the president, while simultaneously serving to rebuke Trump by adding his name alongside the notorious Nixon’s as the only presidents pardoned. Ironically, Trump’s eventual fate and legacy might be in hands of the opponent he has so mercilessly dismissed.

The consequences of Trump’s disruptions of one of the hallmarks of American politics — the peaceful and dignified transfer of power after an election — will have consequences for years to come. Future presidents will hopefully see the end of Trump’s single term as a lesson of what not to do.

This article is republished from The Conversation under a Creative Commons licence. Read the original article.

New Year’s Resolution: Can I hit a golf ball 300 yards?