Current Edmonton Oilers head coach Dave Tippett has won over 600 games as an NHL head coach, and before that, he appeared in 721 games as a player.

In the 1980-81 season, the Prince Albert Raiders were the top Junior “A” hockey team in Canada — and Tippett was a forward on the team.

“I think we only lost a handful of games all year, so I think we were pretty good,” chuckled Tippett in a recent interview.

Read more: Prince Albert Raiders return as one of the favourites in shortened WHL season

Indeed they were. The Raiders won 50 games while losing only seven times with three ties that season.

“There were a lot of players drafted off that team, and Robin Bartell, Greg Paslawski, and myself played pro but were not drafted,” Tippett said.

The Raiders beat the Belleville Bulls in the Centennial Cup final in May 1981, where Tippett was awarded top scorer.

Tippett sat beside assistant coach Rick Wilson in the team picture. Over 20 years later, Wilson would be Tippett’s assistant for six seasons when he was head coach of the Dallas Stars. 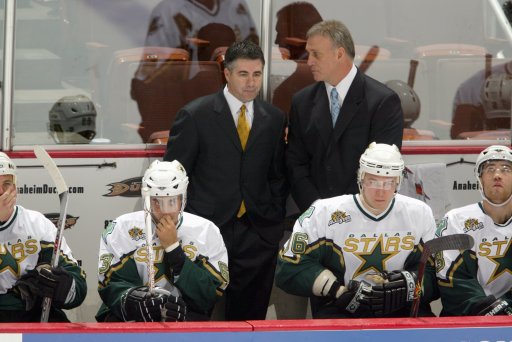 Head coach Dave Tippett and associate coach Rick Wilson of the Dallas Stars look on from the bench against the Anaheim Ducks at the Honda Center on October 15, 2006, in Anaheim, California.

The men who played for the Prince Albert Raiders still remain close.

“Two or three years ago, I had the whole team down to my place in Arizona,” recalled Tippett.

“We watched that final game on video.

“Funny now, I thought we played a good game. Now as a coach, I look back — holy crow, we made a lot of mistakes!”

“There’s an old saying, ‘When you win, you walk together forever.’ That’s true with that team,” Tippett said.