A COVID-19 outbreak has been declared at a long-term care facility in Lindsay, Ont., the region’s health unit reported Friday.

The Haliburton, Kawartha, Pine Ridge District Health Unit reports an outbreak at Caressant Care Lindsay on Mary Street. According to the home, a staff member has tested positive for the virus. An outbreak was last declared at the home and adjoining retirement residence in late January.

“We are required to isolate all residents in their room at this time,” the home stated. “We will increase our staffing as able to facilitate the isolation of being in their rooms. At present this is a 14-day period of isolation.”

On Friday the health unit reported eight new cases in its jurisdiction: Six in the City of Kawartha Lakes and one each in Northumberland and Haliburton counties.

Variant cases of COVID-19 continue to climb, now at 378, compared to 373 on Thursday. Northumberland County has reported 234 variant cases, with 125 in the Kawarthas and 19 in Haliburton County.

Of the health unit’s 1,652 confirmed cases since the pandemic was declared 13 months ago, 1,504 cases are now deemed resolved (seven more since Wednesday) — approximately 91 per cent of the total.

Other active outbreaks in the health unit’s jurisdiction: 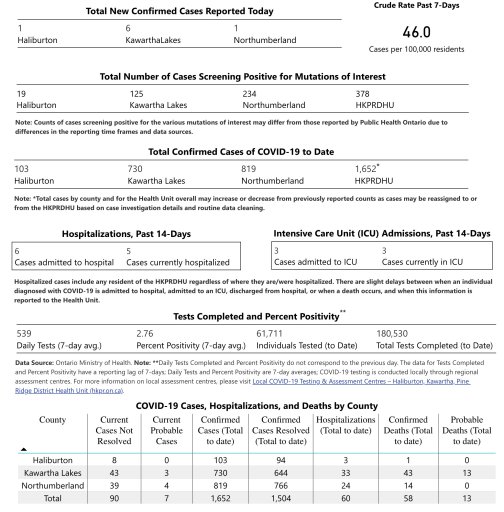 Other data for Friday:

Schools within the health unit’s jurisdiction detailed their reports of COVID-19 cases as of Friday: