Why COVID-19 messaging matters to teens and young children

Why COVID-19 messaging matters to teens and young children

As COVID-19 variants spread more rapidly, the push to keep the virus from spreading in classrooms has also pushed students across the country to online learning — again.

Teenagers, like their parents, are feeling pandemic fatigue, but a health researcher said it’s critical young adults are part of the messaging.

Watch: Busting myths and misinformation: the fight for the truth about COVID-19

“For sure, kids are feeling the fatigue,” said Timothy Caulfield, a law professor and researcher with the University of Alberta Health Law Institute.

“There is concern this is going to lead to complacency with respect to following public health guidelines… we’ve seen that play out in some jurisdictions.”

Caulfield has made it his mission to debunk health myths and misinformation — COVID has kept him busy.

Will dig into emerging research about who believes, why, and what we can do fight the noise. See ya soon! pic.twitter.com/fROriJT5xn

“There’s research with teens and young adults to suggest they’re more likely to fall for misinformation.”

Caulfield said the fact that high school students are often on their phones has made them targets for incorrect information regarding the pandemic. He stressed the importance of teaching all students media and science literacy.

“I don’t think we can teach critical thinking early enough. Let’s teach it in elementary so kids can tease out what’s real and what’s not real.”

Caulfield said the messaging matters more than ever right now because teens and young adults “don’t feel the risk as much.”

Read more: Only 1.4% of kids, teenagers diagnosed with coronavirus in Canada hospitalized

“So the narrative for kids I really think has to be about community — your role to help this entire community get through this pandemic.

“I think kids resonate with that. I think movements mean something to kids.”

Caulfield said for elementary students, social distancing and masking has become routine, but facts based on science are still critical for children.

Dr. Stephanie Liu, a family physician in Edmonton and assistant clinical professor at the U of A, has focused on making sure young children and their parents are armed with the facts.

Liu has also penned a series of children’s books. The ongoing pandemic led her to create “Georgie Shark and COVID-19.”

The story tackles why Georgie still can’t visit his grandparents and still must wear a mask.

“I wrote the book to explain why the world is so weird right now,” said Liu.

Like many parents, Liu said early on in the pandemic, she was fearful of the unknown and of her two young children getting sick.

“Anytime they touched a surface I’d say, ‘Don’t touch it!'”

Liu said she realized she was scaring her daughter Madi, now four, and her son George, 16 months.

“The reason I wrote this book is because I think the illustrations, the messaging is clear but also a little gentler. It’s really a good way to explain COVID to kids.” 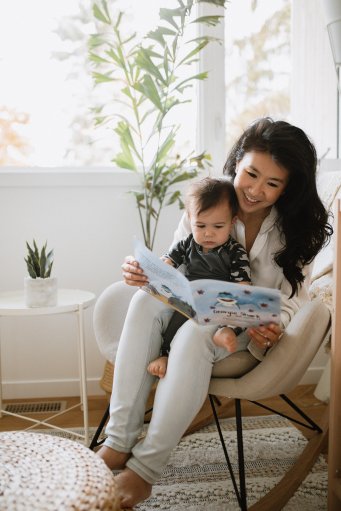 “Science-based books. That’s exactly the goal of Georgie Shark. I want parents to know this is credible information they can show their kids,” added Liu.

Caulfield reiterated the need to work with older students on a level they also understand.

“Let’s use those hashtags, let’s get the kids involved so they recognize they’re not doing this for themselves,” he said. “They’re not even doing it just for their family, they’re doing it for their community and I really do believe kids respond to that messaging, certainly teens do.

“Not only is that scientifically accurate, I think that’s a constructive science communication strategy.”