People who identify themselves as “patriots” are driving from Calgary to Edmonton on Sunday to protest the closure of GraceLife Church, a gathering place west of Alberta’s capital city that has been flouting COVID-19 restrictions throughout the pandemic.

The convoy plans to meet in the Deerfoot City parking lot at 6:30 a.m. with their vehicles decorated in signs and posters, drive to Red Deer for a break to “meet up with fellow patriots” and arrive at GraceLife Church by 10 a.m. 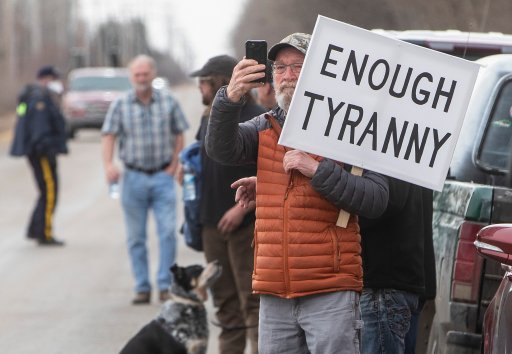 Supporters gather as a fence is put up around GraceLife Church near Edmonton on Wednesday, April 7, 2021. The Alberta government has closed down and fenced off a church that has been charged with refusing to follow COVID-19 health rules. Alberta Health Services, in a statement, says GraceLife church will remain closed until it shows it will comply with public health measures meant to contain the spread of the novel coronavirus.

Authorities fenced in the church on April 7. Alberta Health Services said it will prevent building access until people “demonstrate the ability to comply” with restrictions.

“GraceLife Church has decided not to follow these mandatory restrictions, nor have they attempted to work with AHS to reduce the risk of COVID-19 transmission,” AHS said on April 7.

“With COVID-19 cases increasing and the more easily transmitted and potentially more severe variants becoming dominant, there is urgent need to minimize spread to protect all Albertans.”

Pastor James Coates spent a month in jail for violating a bail condition not to hold services that ignored public health measures on capacity limits, physical distancing and masking. He was released March 22, 2021, after pleading guilty and was fined $1,500.

‘This virus is real’

When asked Saturday if Premier Jason Kenney had a message for the protesters, he said his message for “any Albertan” is to take the pandemic seriously.

“My message to people of faith, in particular, would be if you believe in the sanctity of human life, please act accordingly,” he said.

“This virus is real. It’s taken the lives of 2,000 Albertans, of millions of people around the world, and we are right now in the midst of what is likely the biggest wave of infection that we’ve experienced today.”

Kenney reminded people to follow the public health guidelines by having two metres of space between cohorts, wearing masks and avoiding physical contact.

“It would be tragic if a gathering would result in a superspreader event,” he said.

The premier said this case is ironic because Alberta has had the greatest protection for exercising religious freedoms of any province in Canada.

“This province has never suspended congregational worship. We have had limits on capacity, just like we do for fire code, but unlike most Canadian provinces, we have never shut churches or other places of worship,” Kenney said.

“We have about 10,000 places of worship in Alberta that have worked very hard to comply with the guidelines, to keep their congregants and the community safe. We have apparently one, maybe a couple of others, that have refused to do that.

“I think it’s ironic that in the province that has maintained the greatest freedom for freedom of worship, because the government is reluctant to impair constitutional rights, that this kind of event is happening.

“So I would say thank you to the 10,000 faith communities that have carefully followed the guidelines as best they can to respect the sanctity of human life and to protect the vulnerable.”

– With a file from The Canadian Press

How to live a zero-waste lifestyle: Small steps toward a greener future