Manitoba Justice officials continue to crack down on a controversial weekend rally at The Forks.

The rally, held on Sunday afternoon, drew hundreds of protesters — most of whom were seen without masks and defying social-distancing regulations — in opposition to the province’s COVID-19 restrictions.

A Manitoba Justice spokesperson told Global News that officials were present at the rally.

“Enforcement officials were focused on surveillance and interventions,” the spokesperson said.

“Tickets were issued, information was gathered, and further tickets are pending based on video and other information collected on site.

As of Wednesday morning, officials had handed out two $1,296 tickets for failure to self-isolate and gathering in a group larger than permitted.

The Justice spokesperson said the investigation is ongoing, with additional tickets potentially in the cards. 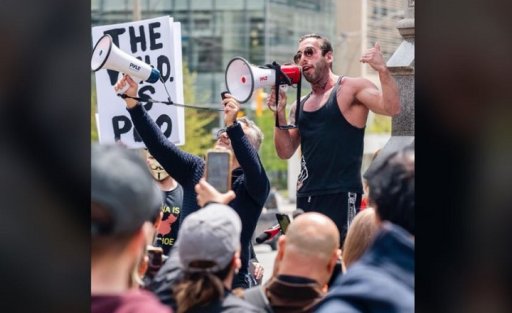 Chris Sky at a rally

One of the speakers at the Winnipeg rally, Chris (Sky) Saccoccia, was arrested Tuesday in Thunder Bay, Ont. — the next stop on his cross-Canada “freedom convoy.”

Thunder Bay police confirmed that Saccoccia, 37, along with a man from British Columbia, was charged under the province’s Emergency Management And Civil Protection Act.

“We all have obligations regarding the provincial orders,” Thunder Bay police said in a statement.

“We will enforce when situations dictate, such as incidents where there has been a blatant disregard of the province’s emergency orders.”

Further fallout from the Winnipeg rally has come in the form of some attendees facing consequences like loss of employment.

The now-former president of the Manitoba Chiropractors Association (MCA), Steven Gall, was asked to resign by the organization’s board due to his participation in the rally.

“As a profession, the MCA does not condone or tolerate behaviour which stands in clear
contravention of public health orders,” said the MCA’s acting president, Gerald Chartier.

“Throughout the pandemic, and as part of Shared Health’s Essential Services Network, we
have stood united with the provincial government in its fight to protect Manitobans. The MCA
will continue to do so by mandating strict adherence by our members to all orders.”

Among others suffering professional repercussions as a result of their involvement in the rally was an employee of the Lord Selkirk School Division, who said in a now-deleted tweet that he was suspended for his participation.

The man said he had done nothing wrong, compared the rally to Black Lives Matter protests and said he attended the event on his own time as a “political representative.”