The restaurant is a fixture in the area. It’s been in business for 41 years.

“They’re one of the longest-serving restaurants in the history of Coaldale,” said Jack Van Rijn, one of the drive-by organizers. “Over four decades. For southern Alberta, it’s going to be a huge loss.”

Van Rijn wanted to make sure the Kollias family, who ran the restaurant, got the farewell they deserved. The owners, Nick and Sia Kollias, are retiring.

“We used to have a joke that when you couldn’t find the kids, just go to Dilo’s,” he said, wiping a tear from his face. “That would be one of the first places we would look. It’s just been a huge family affair for many years.”

He was one of the organizers of the drive-by. 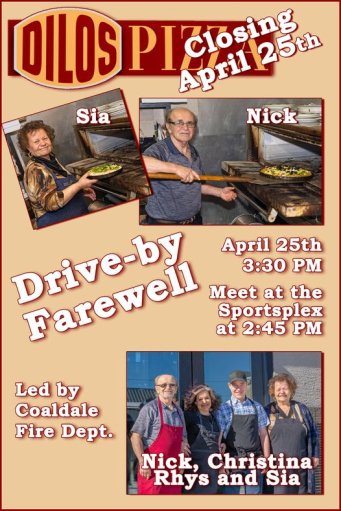 Cars filled the Coaldale Sportsplex parking lot on Sunday afternoon to get ready to say goodbye.

The parade was led by RCMP and the Coaldale Fire Department.

Dilo’s Pizza in Coaldale is closing after serving the community for over 40 years. Community members organized a drive-by goodbye to celebrate the owners retirement (and according to some kids behind me, “the best pizza in the world.”) pic.twitter.com/9GQEZST01y

One of the organizers sent me this photo of the gathering before the drive by started pic.twitter.com/DDqqqWws4f

Christina Kollias, daughter of owners Nick and Sia Kollias, knew about the farewell. Her parents were surprised when they were led out of the restaurant and onto a truck bed where lawn chairs and an umbrella was waiting for them.

Cars came down the street. Everyone was waving, some stopped to say goodbye, and some had messages painted on their windows.

“It was very nice of the town to do that,” said Christina after the parade. “And we appreciate everybody. And we will miss everybody.”

Nick and Sia said they were very surprised and were still wiping away tears even after the parade ended.

“Very emotional,” said Christina. “We felt the love today. And we want [everyone] to know we love everyone in the community.”