The formal recommendation to conclude a military police probe into an allegation against Gen. Jonathan Vance in 2015 was made within hours of him being sworn in as chief of the defence staff, Global News has learned.

Global News obtained records of that investigation through access to information laws on Tuesday night. The 455-page file is almost entirely redacted – a mere handful of pages contain any visible information — but included are two brief references to concluding the investigation: one dated on July 17, 2015, and the other on July 21, 2015.

Global News has confirmed with the Department of National Defence that the July 17 notation in the file was the formal recommendation by military police to end the probe and that the July 21 date marked the approval of the formal conclusion.

“Can confirm,” a spokesperson said when asked if the July 17 date was when the recommendation to close the investigation was made by military police. When asked about the July 21 date, the spokesperson said: “That date is the official conclusion.”

Vance officially became chief of the defence staff at 10 a.m. ET on July 17, 2015, according to a spokesperson for the Department of National Defence. 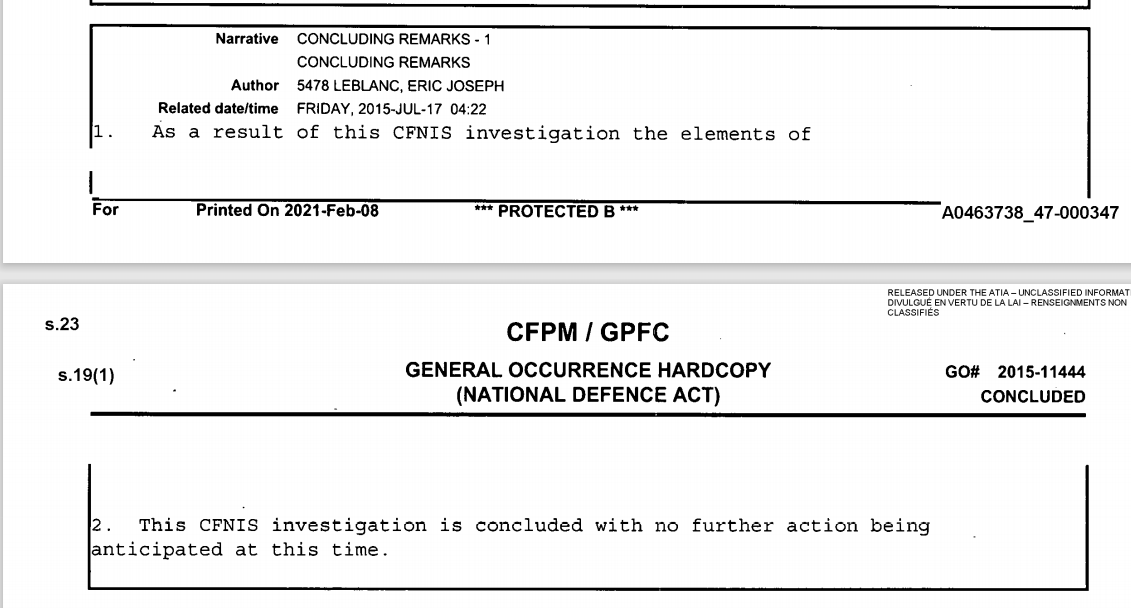 The notations on the file are attributed to then-Maj. Eric Leblanc, commanding officer of the Canadian Forces National Investigation Service — the investigative arm of the military police, which handles sensitive investigations.

Leblanc is now a lieutenant-colonel.

On Feb. 11, 2021, Global News also reported that Vance had been investigated by military police in 2015 regarding concerns about his conduct while deployed in Italy the previous year, but that no charges were laid.

“An allegation against General Vance was investigated by the military police in 2015 for conduct while serving as Deputy Commander, Allied Joint Force Command Naples, a position he held from 2013 until July 2014,” said a military spokesperson in February.

“The Canadian Forces National Investigation Service (CFNIS) investigation did not meet the elements of the offence to lay charges under the Code of Service Discipline or the Criminal Code of Canada.”

News of the timing of the conclusion into the 2015 allegation comes a week after one of the women at the heart of the allegations reported this year testified that Vance told her he “owned” military police.

“I asked bluntly the [Canadian Forces National Investigation Service] if they had the mandate to investigate and did they have the powers to lay charges, and they would not answer me,” Maj. Kellie Brennan said last week.

“The answer was no because as the CDS [Chief of Defence Staff] told me, he was untouchable. He owned the CFNIS.”

The release of the records also comes roughly one month after testimony at the defence committee by Ray Novak, who was chief of staff to former prime minister Stephen Harper in 2015.

Novak said that in March 2015, Harper was briefed by his national security advisor Richard Fadden during a discussion about the recommendation to make Vance the next chief of the defence staff. In that meeting, Novak said Harper was informed that Vance had a relationship while in Italy with a U.S. officer who was subordinate to him, but not in his chain of command.

Novak said Harper was informed that the Canadian military and Department of National Defence had reviewed the matter and that there was ”no open investigation or reprimand against the general.”

READ MORE: Vance ‘not truthful’ when pressed by Harper on conduct in 2015: former top staffer

He said that briefing also noted that there was no reprimand on file with the U.S. army regarding the other officer involved, and that the U.S. officer was — by March 2015 — Vance’s fiancée.

Novak said Harper reviewed those details with Vance during a meeting and “asked if there was anything else he should know.”

“I don’t recall the general making any comment, other than to state he and his fiancée were relieved the matter had been reviewed and was behind them.”

In July 2015, shortly before Vance was set to be sworn in, Novak said two other pieces of information were received: one of which came from the chief of staff to then-veterans affairs minister and now Conservative leader Erin O’Toole.

Novak said the first piece of information was a phone call from O’Toole’s then-chief of staff that “relayed a rumour that Gen. Vance had an inappropriate relationship and/or had improperly sought to further an officer’s career during his time at CFB Gagetown.”

He said he told the national security advisor about this, and asked for the matter to be investigated.

Novak also said that around the same time, the national security advisor briefed him about an anonymous email received by a senior officer at the Department of National Defence.

“We were briefed that the email alleged an inappropriate relationship during the general’s time at NATO but contained no new information. However, we were informed that receipt of the email triggered a further review of the matter by CAF’s National Investigations Service,” Novak said.

Novak said there was broad agreement at this time between the Prime Minister’s Office, the Privy Council Office and the office of then-defence minister Jason Kenney that they would delay the change of command ceremony — scheduled for later that same month — if needed.

Novak said that roughly a week later, the national security advisor briefed Harper and his office that military police had found no further information regarding the allegation around Vance’s time at NATO.

He said he was told “that their review of the matter was closed.”

With files from Global’s Mercedes Stephenson.