Police say a recent drug bust in Calgary has stopped upwards of 20,000 doses of fentanyl from being sold on the streets.

The bust was carried out by the Alberta Law Enforcement Response Teams (ALERT) and saw nearly $1 million worth of drugs and six firearms seized from two homes. 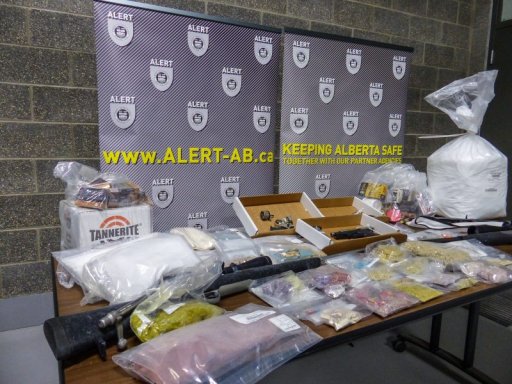 A recent drug bust in Calgary took upwards of 20,000 doses of fentanyl off the street, ALERT said.

ALERT said the seizure included 4.5 kilograms of fentanyl, 353 grams of methamphetamine, 13 grams of cocaine, various buffing agents and $30,000 in cash.

“This is a fairly significant seizure of fentanyl,” Staff Sgt. Shawn Wallace from ALERT Calgary said. “Small ones, large ones, all make an impact on the availability of drugs.”

The search, carried out by officers on April 16, was part of a series of recent investigations by ALERT that aims to disrupt the opioid market.

“Fentanyl has been a scourge in our communities and organized crime is responsible,” ALERT CEO Supt. Dwayne Lakusta said. “ALERT will remain ruthless in our pursuit of drug dealers, and investigations like these, demonstrate our success in getting harmful drugs off the street.”

ALERT said two people were arrested during the course of the investigation.

Nicholas Rybenko, 39, and Wessen Vandenhoek, 35, are charged with 39 total drug and firearms-related offences.

Alyssa Milano Responded To Being Called “Washed Up”