‘We need to pull out all the stops,’ doctor says as Alberta reports 1,592 COVID-19 cases, 5 deaths Saturday

‘We need to pull out all the stops,’ doctor says as Alberta reports 1,592 COVID-19 cases, 5 deaths Saturday

The deaths all included comorbidities:

Read more: ‘I couldn’t take it anymore’: Why some medical staff are calling it quits amid COVID-19

The new cases came from 17,725 tests, resulting in a provincial positivity rate of nine per cent, according to the chief medical officer of health.

There are 584 ppl in hospital incl 129 in ICU. Sadly, 5 new deaths were reported over the past 24hrs. My condolences go out to anyone mourning the loss of a loved one. (2/4)

Alberta Health said 584 people are in hospital, with 129 of them in intensive care.

“I think the frustrating thing that we keep hearing is that, ‘It’s up to Albertans to be better, and then we’ll mitigate the curve. All we’ve got to do is to do better masking and physical distancing and all the rules,'” he said.

“Exempting schools from restrictions aren’t going to work,” he said.

“We’re at the stage now where we need to pull out all the stops, which means going for broke as far as a full lockdown.” 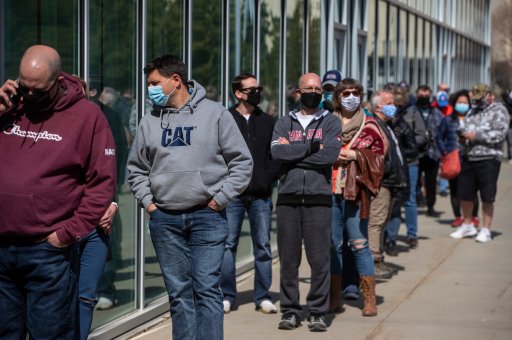 People line up outside an immunization clinic to get their Oxford-AstraZeneca COVID-19 vaccine in Edmonton on Tuesday, April 20, 2021.

This was all predictable and preventable, Vipond said.

“We are as bad or worse than we were when the last set of restrictions were put in on Dec. 7,” he said.

“We have the highest daily case rate. We have a higher ICU rate. The only thing that’s different is we have lower deaths now than we had at that point, and we have a slightly lower hospitalization rate, and those are probably due to the fact that we’ve immunized well. But it’s important to recognize that our ICU numbers are horrible, and our case rate is horrible.”

Even if “heavy-duty restrictions” were put in now, the province would still see a rise in cases over the next two weeks, Vipond said.

“We should be telling people to be working from home if they are able to, we should be closing all non-essential retail, we should be limiting essential retail to 15 per cent — and enforcing it because it’s not enough to just say it has to happen; we have to make sure it happens — and finally, we need to move all of our schooling online until we’re through this crisis,” he said.

“The sooner we act, the better.”

Alberta Health did not respond to a request for comment.