Of all the Whitsunday Islands, Hook Island offers some of the best landscapes and water sport opportunities you can find in the area. You are sure to find the best scuba diving and snorkeling spots on the island. The best opportunity of all, however, is camping.

For camping fans, there is simply no better alternative to Hook Island. Due to this and it’s many attractive offerings, it has a large influx of tourists every year. If you prefer you can avoid staying at hotels altogether, and just pitch a tent at one of the campsites.

Hook Island is a part of the “Whitsunday Islands National Park,” and it has a rather varied geography. The southern side of Hook Island has two fjord-like formations; the Macona and Nara inlets. They are used as a natural anchorage for the tourist boats that stay on the island. The northern parts have beaches with plenty of coral growths just beneath the surface. There you can find popular spots for diving and snorkeling.

How to Get to Hook Island

There are a few options for reaching Hook Island, depending on where you’re coming from. Boats are going from Shute Harbor and Arlie Beach that can take you over. You can also rent a boat and sail to Hook Island yourself. In any case, ask around while securing your transport as you might need to get camping permits for the island if camping is on your menu.

Hook Island Things to Do and See

The Whitsunday Islands rank among the most popular and beautiful travel destinations in Queensland and entire Australia. The archipelago consists of 74 islands, of which only 17 are inhabited. The largest island, Whitsunday Island, is uninhabited, but Whitehaven Beach remains the most photographed beach in all Australia. 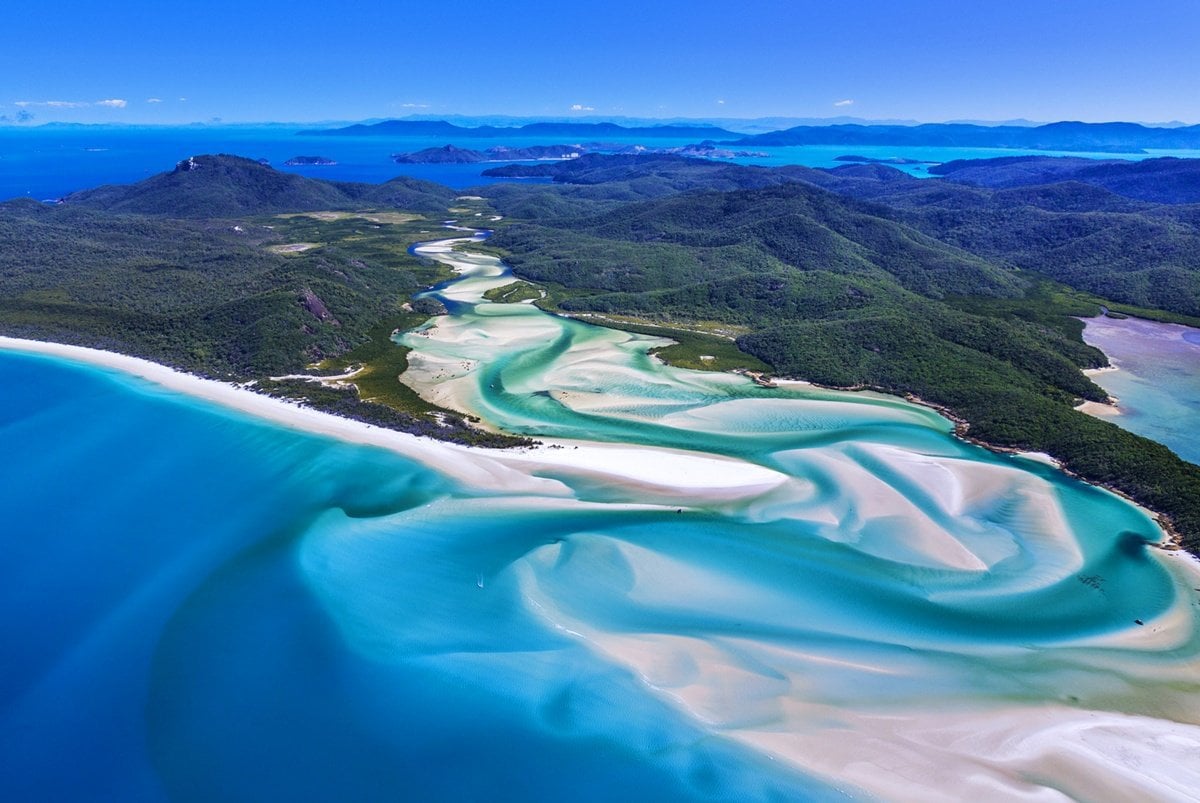 The famous Great Barrier Reef is a major attraction in the Whitsundays and shines during the dry seasons. The period between May and October is the best time to visit the Reef due to low humidity. It is the only living entity that is clearly visible from space and has ideal conditions for all kinds of sports and activities. If you care about sailing, snorkeling, or diving,

One of the most famous and largest inhabited island in the Whitsundays. Due to its population, it’s the perfect choice for indulging in water sports with others. There are yacht and tennis clubs, hiking spots, and many other local attractions. 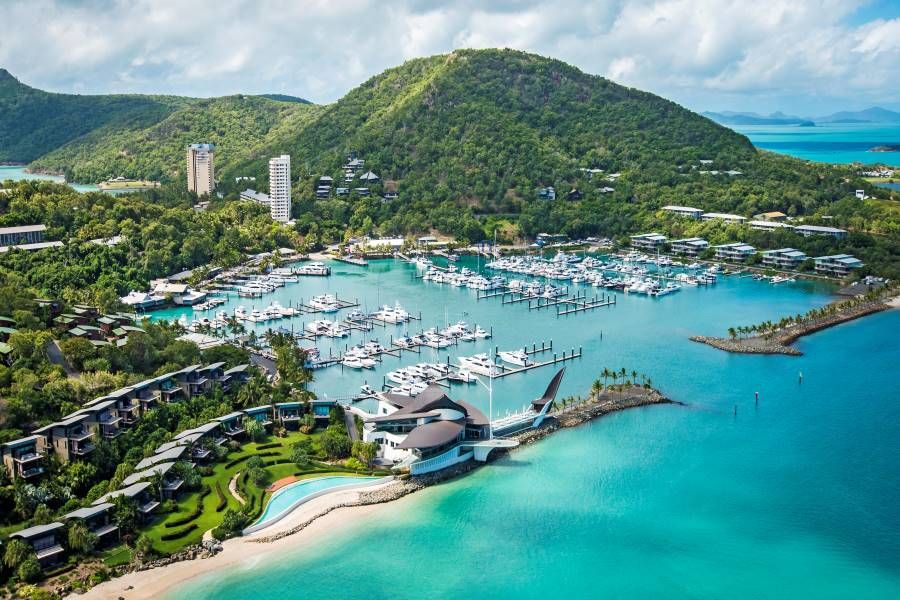 Especially popular with couples and families. It’s one of the smallest islands in the chain and the closest to the mainland. The island is usually full of tourists, particularly the Daydream Island Resort. The resort was reponed in 2019 and has been extremely popular with the crowds ever since. 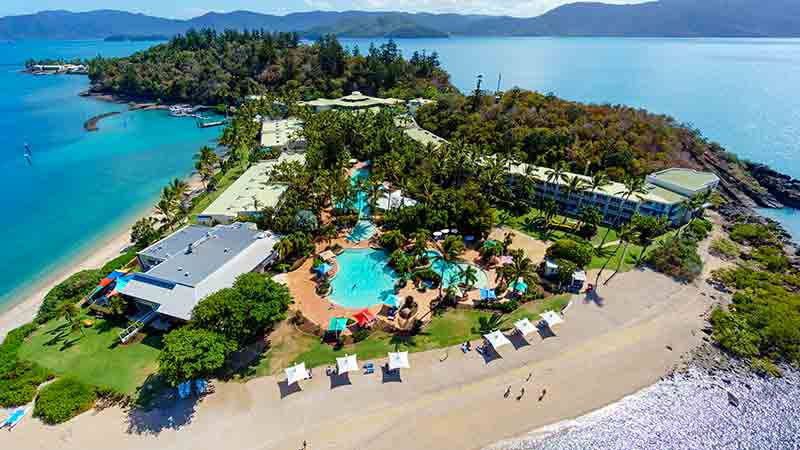 Known for its beautiful beaches and is also a popular travel destination. Long Island is easily accessible from Shute Harbour and is famous for its walking tracks that span the island. They are mostly in pristine condition as the island is a part of the national park like the others.

The best options for camping are on the northern tip of Henning Island. It’s the best choice of all of them when it comes to a relaxing, nature-loving vacation.

Maureen’s Cove is a popular spot for diving and snorkeling off the northern coast of Hook Island. It’s about 300 meters away from the coast, so it’s conveniently easy to reach. The spot used to be popular with spearfisherman before the area became part of the national park. Still, since the rules of the park were enforced, the Cove is now riddled with various schools of reef fish. 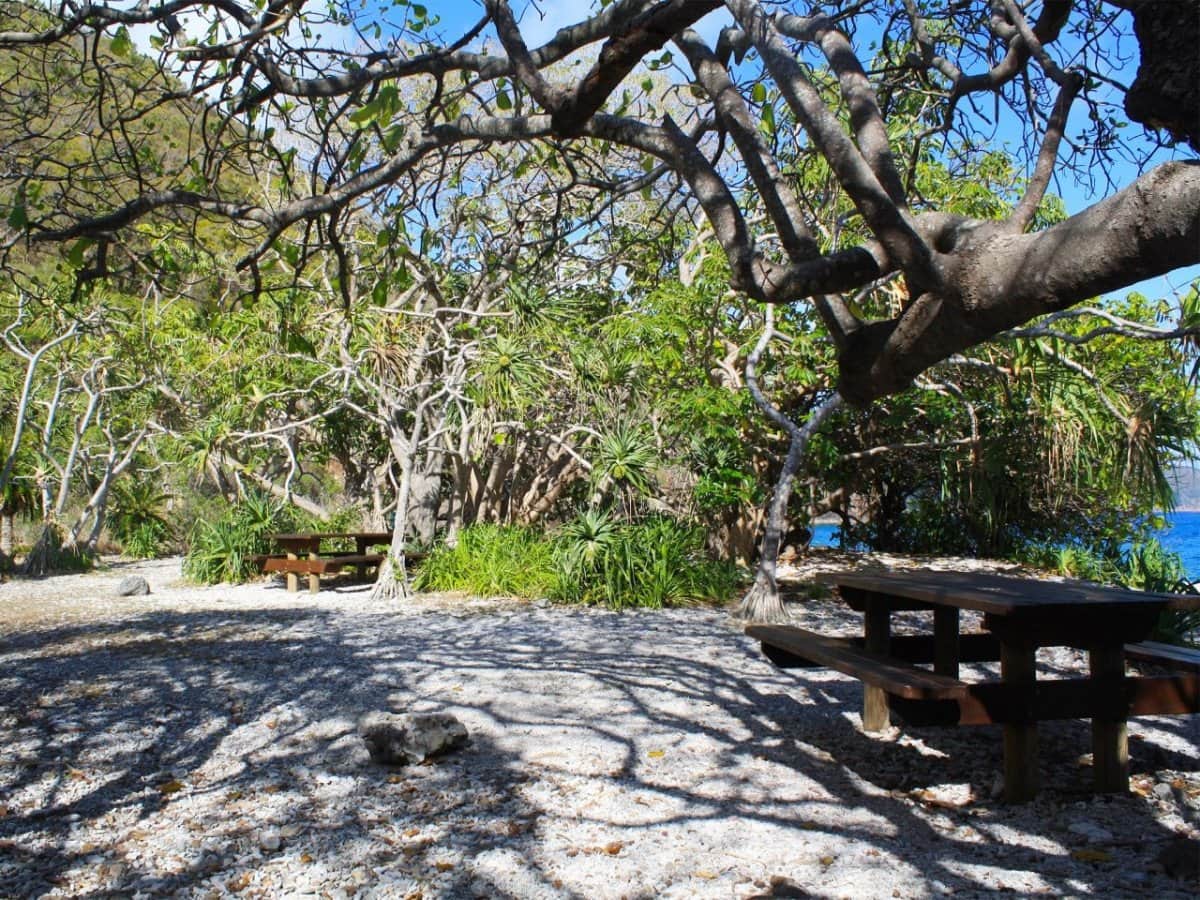 Maureen Cove also contains a camping area near the coast, so you can rest there between snorkeling trips. There are plenty of butterflies that flutter around and enrich the landscape with color, especially during cooler months.

Speaking of butterflies, there is an entire area by the name of Butterfly Bay to the west. It’s another excellent snorkeling spot along with the nearby Luncheon Bay. Both of them offer some spectacular vistas and are easy to overlook due to other, more popular places. 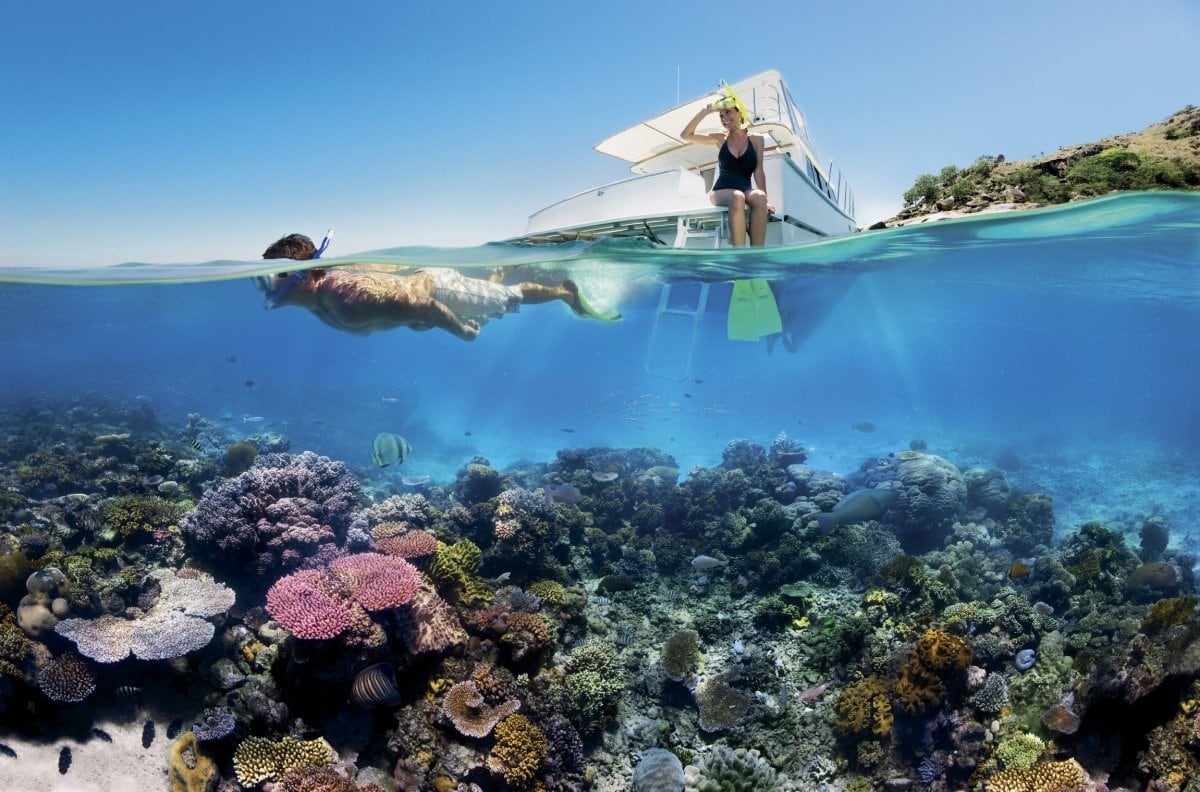 Another local favorite diving spot is “The Pinnacles.” This is a former lighthouse area with many coral bommies that riddle the terrain. The corals of all kinds are plentiful here, some even form huge boulders and tower formations, which are quite distinct.

As we’ve already mentioned, there is a great selection of camping spots on Hook Island. For some, it might be necessary to get a permit, but it’s well worth it in the end. Aside from Maureen’s Cove and Luncheon bay, at the northern edge of Hook Island, you’ll find the Crayfish Beach, widely famous for camping and fishing. 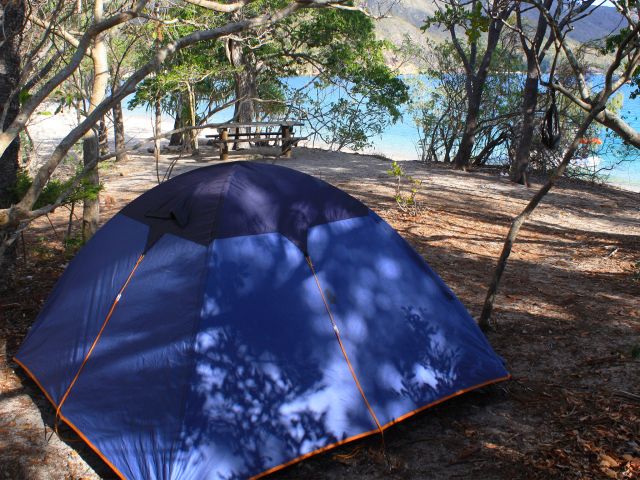 Crayfish Beach, Hook Island is surrounded by rainforests and rocky headlands, and it’s a lovely spot for some peace and quiet. Coral growth litters the beaches here, melding with the terrain.

Hotels on the Mainland

Hook island is ideal for camping and lovers of nature, who want nothing more than to spend the night outside. But if you prefer a soft bed, there are great alternatives on the mainland.

Mantra Club Croc is in close proximity to Whitsunday Shopping Centre and the Cannonvale Beach. The hotel itself has all the elements you would expect, LCD TVs, free WiFi and parking, and weekly housekeeping. They have an outdoor swimming pool and the restaurant, Club Croc Bistro, that is open throughout the day. You can also stay at Marina Shores, in Airlie Beach nearby. They offer in-room kitchens, rooms that are also soundproof, and some lovely balconies and patios. Marina Shores offers some of the finest beds of all local hotels, as well as hydromassage showerheads.

Hayman Island is home to the most luxurious hotel on the Whitsundays, the InterContinental Hayman Island Resort. The hotel went through a $100 million renovation back in 2019 and drives most of the island’s tourism. 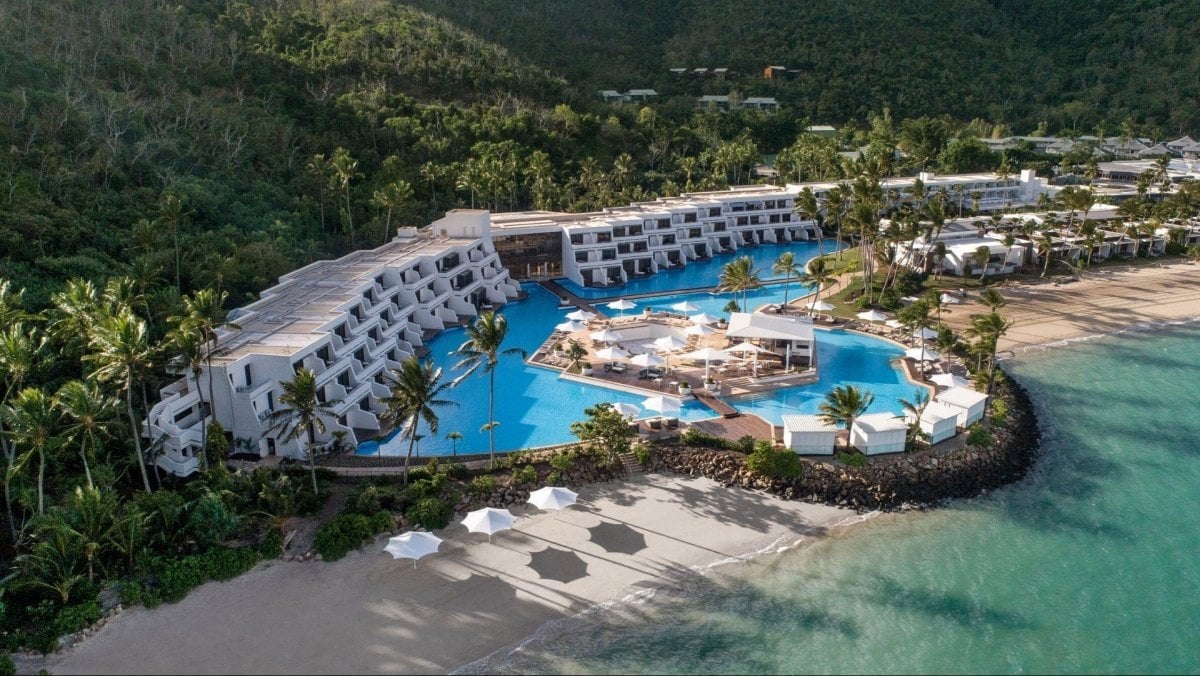 The rest of Hayman island is still quite beautiful, with palm trees, rainforests, coves, and a botanic garden. It’s not uncommon to see guests arrive by yachts and helicopters, as a luxurious resort warrants luxurious transport.