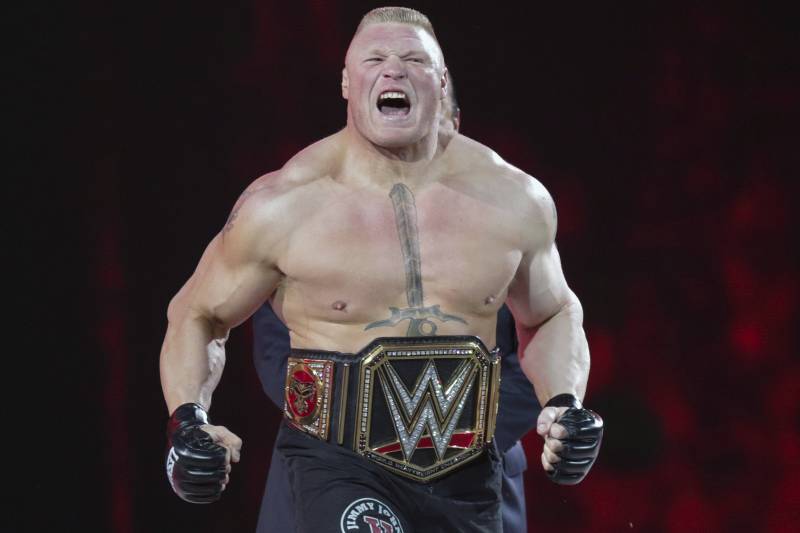 Brock Lesnar is reportedly a free agent after failing to reach a new deal with WWE after his contract expired, according to PWInsider.com.

Lesnar last appeared at WrestleMania 36 in a loss to Drew McIntyre, but WWE has pulled all of The Beast’s merchandise off its website. As a result, it looks like he is a free agent for the first time in years and has the ability to test the open market.

A return to UFC or a jump into movies could be options for one of the most imposing figures ever to enter the squared circle, but what if Tony Khan and All Elite Wrestling worked out a deal with Lesnar on at least a handful of appearances?

With the financial security of the Khan family and TNT’s desire to have a legitimate mainstream star on its programming, signing The Beast would open up a variety of marquee matchups for the company.

Of all the stars in AEW who would deserve a shot at Lesnar, the best possible matchup would be a battle against Brian Cage.

Dubbed “Lucha Lesnar” during his time in Lucha Underground, the nearly 300-pound Beast is not only one of the strongest athletes on the AEW roster, but he is also one of the most physically gifted in terms of versatility and high-flying ability.

Lesnar and Cage could exchange the heavyweight blows wrestling fans would want to see from the two mammoth men, but the latter could pull off the unique moves that would put The Beast on his heels.

Regardless of who would win the matchup—that would depend on the length of Lesnar’s contract—Cage would become a household name by just stepping into the ring with a former WWE and UFC champion and physically dominating him.

One of Lesnar’s greatest attributes is his ability to work with much smaller talents and make them look like legitimate threats. The best possible option for a David vs. Goliath battle would be Darby Allin.

The 27-year-old has emerged as one of the brightest young stars in the business thanks to his daredevil attitude, fearless approach and enigmatic personality. On paper, Lesnar would dominate Allin, but the numbers don’t measure heart.

With ally Jon Moxley filling him in on the dos and don’ts of how to handle The Beast, the bout would be a mixture of Lesnar’s previous battles with smaller stars like Daniel Bryan, Finn Balor, Rey Mysterio or AJ Styles.

Lesnar would almost certainly pull out the victory en route to the AEW World Heavyweight Championship, but the fight would cement Allin as one of the brightest rising stars in recent wrestling history.

One of the matches generating buzz ahead of AEW’s All Out pay-per-view is the 21-man Casino Battle Royale, and Lance Archer is one of the clear favorites in the bout.

Archer winning the match would be great for his character, but imagine the impact if he thinks he won and Lesnar hits the ramp for his AEW debut. Archer would certainly fail to beat The Beast, but the feud would just be getting started.

Lesnar would win the No. 1 contendership for the AEW world title, but instead of rushing the story like WWE and NXT does often these days, it would be a slow build. On the road to getting his title shot, Lesnar vs. Archer would be the marquee battle that gets fans acclimated to the change.

The Beast would eventually win the feud before challenging Moxley or MJF, but the storyline with Archer would be one of the highlights of Dynamite every week.

Another possible option is Lesnar coming into AEW as a wrecking ball and beating up everyone in his path. With so much chaos, it should be a relatively unknown Superstar who steps up to The Beast and stuns him by stealing a win.

Lesnar should underestimate Will Hobbs and give the talented performer the most unexpected victory of his career.

Hobbs has been one of the highlights of AEW Dark since he first arrived, and he has the raw physical power and athleticism to give the former UFC champion a fight. With Lesnar selling for the fresh face, he would instantly become a household name and generate real interest in the product.

Like the others, Hobbs would eventually be destroyed by The Beast when he gets angry and takes the challenger seriously, but the momentum Hobbs creates would result in the birth of a new Superstar on Dynamite.

One of the most underutilized and mistreated WWE Superstars of all time was Luke Harper, but he has been reborn in AEW as Brodie Lee, where he is being allowed to shine the way he deserves.

Lee is a physically dominating presence who makes short work of his smaller competition. While he has squared off with men his size, the battle between Mr. Brodie and Lesnar would be a war.

Lee and Lesnar worked together in 2016 as part of a storyline featuring Bray Wyatt, and the magic the two men made in the ring was palpable. The hope is the two wrestlers could rekindle their chemistry and put on an unforgettable show.

For more wrestling talk, listen to Ring Rust Radio for all of the hot topics or catch the latest episode in the player above (some language NSFW).