Taralyn Dillman watched and listened on May 26 as Richard Elliott, the man who sexually abused her as a teen, was handed down a prison sentence of six years in Lethbridge Provincial Court, a journey that has taken 14 years.

He was found guilty of sexual exploitation and sexual assault on March 23 and sentenced two months later.

Read more:
B.C. man sentenced to 6 years in prison for sexual offences in Taber 14 years ago

“I felt peace,” Dillman said. “I felt justice was served… Four years of working so hard to prove that this man did this to me and to get justice, it was just surreal to have the justice system work for me.”

Now 30, Dillman wants to share her journey of healing and road to justice, hopeful that it will encourage and support other survivors.

Dillman began working at McDonalds in Taber, Alta., when she was 15 years old. She says Elliott, who was her manager and 31 at the time, began to take an interest in her, scheduling them during many of the same shifts.

“What I thought was just a kind, considerate boss asking me about my life was really a predator identifying my vulnerabilities that he could later exploit.” 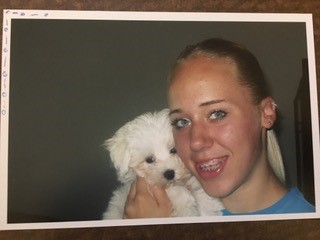 The interactions quickly became sexual, despite Dillman’s protests. He took advantage of her sexually three to four times a week, according to Dillman. She was forced to keep everything secret.

“He took the power he had over me at work and applied it to the personal boundaries of my own body,” she explained.

“It was very confusing to know the difference between what he was doing to me and me saying, ‘No,’ when at work I never was allowed to say no.”

The abuse lasted for nearly two years, stopping only when Elliott suddenly moved back to Victoria, B.C.

“When Rich Elliott moved away, I had repressed all my memories of the sexual abuse,” Dillman said.

It wasn’t until years later, after moving to Lethbridge and getting married, that she was forced to remember what had happened to her.

“In October of 2016, I had a male doctor trigger all these memories of the sexual abuse I had endured and I was completely shocked that I had hid this from myself for all these years.”

“As my body started remembering, it was like it was happening in the moment.”

Her husband was on the sidelines, helping her through the trauma.

“As a paramedic, I thought if anyone was going to get PTSD in our house, it would probably be me,” Craig Dillman admitted. “It was eye-opening to watch my seemingly normal wife just get that trigger and then spiral into the depths of PTSD.”

She immediately sought out the guidance of a psychologist, who helped her realize she wanted to open up to authorities.

Finding her voice: moving through the courts

Const. Greg Schneider with the Taber Police Service had only been in uniform for one year when Dillman walked through the doors of the station.

“May 25, 2017, Taralyn came into the Taber Police Service to report what she believed to be a sexual assault,” he said. “That day I took a statement from her.”

“I appreciated how brave she was coming forward and telling us her story, and being so cooperative and helpful with the entire process.”

Schneider enlisted the help of the Medicine Hat Police Service and the Oak Bay Police Department for the investigation, with Taber police spearheading the process.

“There was always just a deep part of me that felt something was wrong,” Dillman said, as her reasoning for keeping the evidence. “My younger self had this locked box that she kept all these text messages, and he bought me a phone, and he bought me a ring and promised he would marry me.

“I, fortunately, had all of this physical evidence to just corroborate the relationship that I stated that we had, which really helped in proving that it actually happened.”

Dillman said there was a small fear she wouldn’t be believed but those were quickly quashed. She said the entire process through the investigation and the courts was very positive.

“From the moment I walked in to the Taber Police Service, I was believed, I was treated with kindness and respect, and just that alone was so validating to just not burden this secret on my own anymore.

“This was a secret that I had kept for so long and it was just making me so sick, and it wasn’t my secret to keep.”

Once charges were laid, Dillman wanted to ensure there was no publication ban on her case, for fear of not being able to share her story publicly.

A new woman wanting to help others

According to the Alberta Association of Sexual Assault Services, one in three girls and one in six boys are sexually abused by the time they reach 18.

“No matter what age you’re at, it’s difficult to maneuver, particularly for young people that may not have the same types of strengths,” she said.

“For us, it’s really powerful when we hear the stories of how people have taken back the control in their life,” Cassie said.

Now, the Dillmans are living life to the fullest, taking it one day at a time, with the hope others can be inspired by their journey.

“It’ll never go away but we can get to the point where it doesn’t control our life anymore,” Craig said.

“I want to use my pain as power,” Taralyn said, “to help other survivors who have gone through a similar experience.

“I think it’s all about just getting back your voice and not wanting it to ever be silenced again.”