Acute otitis media acuta is one of the most common diseases in children. It is usually painful, but without serious complications. Read more about symptoms, causes, diagnosis, therapy and self-help in acute otitis media. 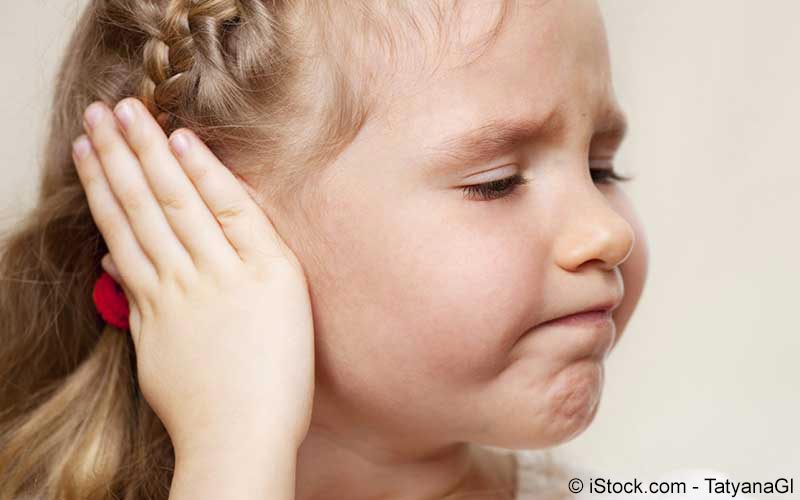 Acute otitis media is an inflammation of the mucous membranes in the middle ear. This inflammation can be very painful. In most cases, however, it remains without serious consequences. In a few cases, middle ear infections develop with complications that can lead, for example, to hearing impairments, tympanic tears or meningitis.

In addition to otitis media, there is also ear infection, in which the external ear canal is affected (otitis externa) and inflammation of the inner ear (the names depend on the inflamed structure).

Acute otitis media is one of the most common childhood diseases. In contrast, children are rarely affected by the chronic form.

The symptoms differ according to the course. Acute otitis media often develops after a respiratory infection. Suddenly the general condition deteriorates and there is severe, sometimes stinging or pulsating earache. These increase within hours. The affected ear feels oddly full. Sometimes you have “pressure on the ear”. Hearing is increasingly restricted. Sometimes tinnitus (ringing in the ears) occurs. Rarely dizziness and balance problems accompany the ear symptoms.

Children: fever and ringing in the ears

The body temperature usually rises in acute otitis media. Fever over 39 degrees Celsius is not uncommon. In children, the so-called forced ear is striking. This means that they constantly touch the affected ear. They are also tearful and uncomfortable. Infants often complain of abdominal pain. Sometimes there is vomiting and diarrhea .

Such an effusion is an ideal breeding ground for bacteria. These multiply and colonize the tube and middle ear. Now the mucous membrane no longer forms an aqueous liquid, but releases a viscous, purulent secretion. The result is an acute purulent otitis media with severe ear pain, reduced hearing and a feeling of pressure and fullness in the ear. Acute purulent otitis media can also develop if bacteria migrate from the inflamed nasal mucosa or the nasopharynx through the ear trumpet into the middle ear.

Complications in the course of acute otitis media can lead to permanent damage.

If the purulent effusion cannot drain into the nasopharynx, an increasing pressure builds up behind the eardrum. In the worst case, this leads to tearing (perforation, rupture) of the eardrum. This relieves the pressure on the middle ear and reduces the ear pain on the spot. The purulent secretion runs through the torn eardrum to the outside via the external auditory canal. The secretion can smell bad and be mixed with blood.

A feared complication in acute otitis media is inflammation of the cavities of the bony mastoid process of the temporal bone (mastoiditis). The patients report a pulse-synchronous pain in the ear and pressure pain behind the ear. The ear usually sticks out. In addition, purulent secretions run out of the ear canal. Then antibiotics and surgery are essential.

The diagnosis of acute otitis media should be made by an ear, nose and throat doctor (ENT specialist) or a pediatrician. For diagnosis, the eardrum, nose and nasopharynx, throat and sinuses are examined first. This is often followed by a hearing test. Ear secretions are sent to the laboratory for examination. Imaging procedures such as X-rays and computed tomography of the head rarely follow.

Various medications and measures are available to the doctor for the treatment of acute otitis media.

In the case of purulent otitis media, your doctor will prescribe an antibiotic that is tailored to the causative agent of the inflammation and the age of the person affected. Proven antibiotics for otitis media are amoxicillin, azithromycin or clarithromycin.

Ear drops are usually no longer given today. If a doctor still prescribes such drops, they may only be added if the eardrum is intact. Ear drops often contain phenazone and salicylic acid compounds.

To empty a middle ear effusion, a small incision (so-called paracentesis) is made in the front, lower part of the eardrum. The effusion can be suctioned off. Such paracentesis takes place in adults under local anesthesia, children are given general anesthesia.

After paracentesis, the opening in the eardrum would close again within a few days. To avoid this, a small plastic, titanium or gold tube is inserted into the cut. The simulated secretion can continue to flow through this. In addition, the middle ear is ventilated and can heal under normal pressure conditions.

The body usually rejects the tympanic tube on its own within 6 to 12 months. Otherwise the tube is surgically removed. The tube is also removed if the hole keeps clogging up with thickened secretion or ear wax. The eardrum usually heals itself afterwards. [H3] Self-help in the case of acute otitis media There are a number of measures that can be used to support the healing process in the case of acute otitis media.

To support the healing process, you can take tablets with anti-inflammatory and decongestant herbal remedies. The active ingredients bromelain and papain are suitable, for example.

Tablets or coated tablets with anti-inflammatory and decongestant substances such as diclofenac and ibuprofen have an analgesic effect. In children, the use of paracetamol is recommended, which also has an antipyretic effect.

The placement of so-called onion bags and the burning of ear candles make many ENT doctors nonsensical. Nevertheless, many parents swear by these home remedies. From a medical point of view, it can be said that if the medically prescribed therapeutic measures are used, these home remedies can at least not hurt.

With another widely used home remedy, however, it looks very different. Heat applications in acute otitis media can only be discouraged. Warmth like red light or hot water bottle sometimes worsen the course of the disease.

To prevent acute middle ear infections, try not to clean your ears (and children’s ears) with cotton swabs and never with hard objects. This would disrupt the ear canal self-cleaning mechanism. There is also an increased risk of injury. It is enough to wash the ear and the auricle during daily cleaning, more is not necessary.

Sensitive ears should be protected when bathing with special bath wool from the pharmacy. Please do not use conventional cotton for this. It swells when it comes into contact with water and may no longer be removable from the ear.

Strengthen your immune system to prevent respiratory infections and thus acute otitis media. In addition, a vitamin and nutrient-rich diet is recommended. Alcohol should only be drunk in moderation, ideally smokers quit smoking. You will also strengthen your immune system if you exercise regularly, go to the sauna and avoid excessive stress. Dietary supplements and herbal medicines to improve the immune system have no demonstrable effect in otherwise healthy people.