Toronto police say three people have been charged after thousands of people attended two large gatherings in the city on Saturday and officers are probing an assault that was captured on video.

Police said in a news release that the first event happened between noon and 4 p.m., when around 5,000 people gathered at Queen’s Park and then marched through downtown streets.

Police said two officers were injured, with one being bitten.

Meanwhile, in the evening hours, thousands of people gathered at Nathan Phillips Square in support of Palestinians amid the ongoing conflict between Israel and Palestine.

A smaller group of pro-Israel demonstrators also gathered in the area.

Recent events in the Middle East have marked some of the worst violence between Israel and Palestine seen in years.

“Police are continuing to investigate this event and have been clear that organizers and attendees of events are subject to enforcement and that charges can be laid in the days following events,” the news release said, in reference to provincial COVID-19 restrictions which currently prohibit indoor and outdoor gatherings.

“The Toronto police continue to enforce the provincial emergency orders. When thousands of people gather for demonstrations or protests, the priority of the police must be to keep the peace and take steps to protect the safety of all involved and that of people and property in surrounding areas.”

The news release didn’t mention any charges laid in relation to emergency orders that prohibit gatherings.

Police said they’re also investigating a video of an assault that was posted online.

Officers said the incident happened outside of Nathan Phillips Square and investigators are asking anyone with information, including images and videos, to contact them.

A video posted to Twitter appears to show a person with a Palestinian flag on their back and another individual each striking a man with an object. 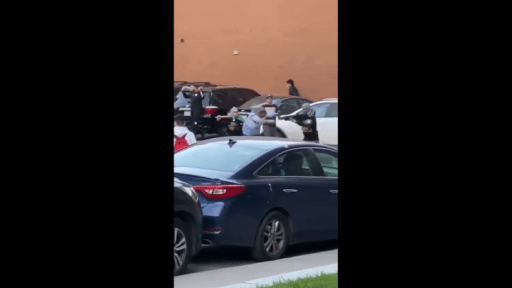 A video posted online appears to show an assault in Toronto Saturday.

I have been in touch with @TorontoPolice Chief Ramer and have made available to him a video of a particularly disturbing incident which had been sent to me.

The @TorontoPolice managed crowds of thousands who participated in demonstrations yesterday. Our priority must be public & officer safety in these situations.We continue to investigate these events including an assault that took place nearby. Charges will be laid where warranted. https://t.co/H8vpl35HnU